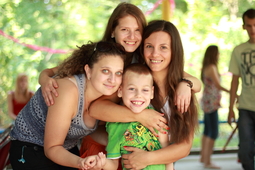 Since the collapse of the Soviet Union, countries in the Commonwealth of Independent States (CIS) have experienced painful social and economic consequences. These have especially affected the most vulnerable people—children—who are often living in difficult and unsafe circumstances.

In a fragile economy, parents are forced to work, leaving children alone. That has proven to be fertile ground for children and youth to become victims of drugs and alcohol abuse. According to the UN, children and adolescents who are living on the street or in communities with high drug and alcohol use are also particularly at risk for contracting HIV. And children from poor families or disadvantaged backgrounds are also more at risk for human trafficking, which is too common in several CIS countries. Early intervention is the key to offering children and youth opportunities for a different path and a successful future.

Beyond these social problems, CIS communities also experience a spiritual void. Under communism, people living in former Soviet countries were not allowed to practice faith, and that legacy has continued. Even today communities in CIS rarely promote spiritual values. Children and families are in need of real hope.

Our goal is to minister to the holistic needs of vulnerable children through local churches who care for their well-being. Through Kids Clubs, we minister to the whole child through spiritual nurturing and discipleship, educational programs, life skills development, nutrition, health care, emotional support, and advocacy.

Currently, more than 600 children and teens are directly benefiting from Kids Clubs ministries throughout CIS, and there are also children participating in other outreach efforts.
Many of the participants come from broken homes, and through these ministries, they have encountered the love of Christ and a church family they can share their lives with—and many of them have come to faith in Jesus. Through the interaction with children, we also reach out to parents to show love and build a relationship.

We believe that children have a special value in the Kingdom of God, based on Jesus’s words (Matthew 18:1-5; 19:13-14). NCM CIS is fully committed to reaching and ministering to children throughout the former Soviet Union.

HOW YOU CAN HELP:

For US $25 you can provide a child with Kids Club ministry for one month.

Victor, 17, lives in Ukraine. He shares this story:

When I was 7 years old, a Kids Club was organized in our village. I became an active participant of the club. My brother and I and our friends enjoyed the activities, games, lessons, and play time organized for us by the volunteers. I quickly learned verses from the Bible, and when we had Bible quizzes I always won the first place. One of the best memories of my time in Kids Club was a trip to our Christian children's camp in Saki. It was a lot of fun, and I was able to make many new friends.

Now I am 17. Time has passed quickly. At the last children camp, I was no longer as a participating as a child, but as a counselor. It really transformed my life. I had always felt care and protection, but now I was taking care of other children. My life principle is to love all people around me and always help the weak.

In the US:
Make checks payable to General Treasurer
and send them to:

In Canada: Make checks payable Church of the Nazarene Canada and send them to:

Be sure to put ACM1731 in the Memo area. Thanks for your donation.